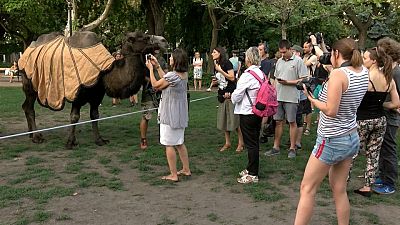 Hungarian environmentalists were seen bringing camels to the neighbourhood of the Hungarian parliament in Budapest on August 11, to protest the country's lack of measures to conserve its water resources.

Environmentalists from the Green Guerrilla Movement claim that within a few decades, a large part of Hungary could become a desert if the government does not radically change its climate strategy.

To date, 40% of Lake Velence has dried up and the Kis-Kunság region has been declared a semi-desert.

"The trees are dying and only the very resistant grass survives. Soon you will only see pure clay, sand dunes and dry vegetation next to the road," Bagatur Subotáj, spokesman of the Green Guerrilla Movement, told Euronews.

But activists warn that this apocalyptic picture can still be avoided if the water demands of Hungarian agriculture are significantly reduced.

_Watch the video above for the full story.
_

Klára Dobrev wins first round of opposition primary in Hungary

What caused the Tonga eruption?

Why are these Australian dancers performing on a melting iceberg?

The tourism paradox: Is the Maldives facing an existential crisis?