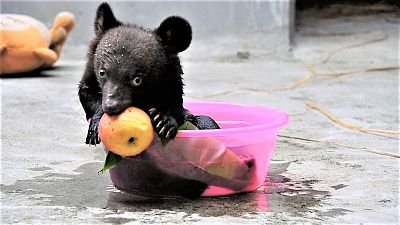 But one tiny, terrified cub called Smudge stood out from the rest.

Smudge was the last one to be born on the Nanning bile farm in China in 2014. His fate seemed to be decided, just like the other 132 bears stored in rows and rows of cages, until the charity's carers came to rescue him.

Bile farmers would routinely extract the substance from bears' gallbladders so that it could be sold for traditional medicine, while breeding the next generation of bile bears.

But when a new owner took over the bile farm, the bears had more of a chance of being set free. Mr Yan worked closely with the NGO to save their lives.

"As soon as he realised that the bears were being extracted for their bile, he felt he didn't want to be part of that process at all. So he contacted us knowing that we have a sanctuary."

Most farmed bears are kept in tiny cages, underfed, dehydrated and suffering from multiple diseases. Their bile is often contaminated. Yet despite the availability of herbal alternatives, bear bile products are still sought after in China, Japan, Korea, Vietnam, Malaysia and Taiwan.

Animals Asia was founded in 1998 by Jill Robinson after she visited a bear bile farm and was devastated by the experience. She has dedicated her life to stopping the practice that impacts over 20,000 bears' physical and mental conditions in Asia.

While there is a lot of work still to be done in China, in Vietnam, she is getting close to this goal.

"In Vietnam, the government have agreed through collaboration, of course, with Animals Asia, that the end of bear bile farming is only a few years away now, and we've been given the opportunity to help rescue the remaining bears on bile farms," she says.

Due to COVID restrictions, the campaigners will likely only see the end of bear bile farming in 2024-2025.

Watch the video above to learn how Smudge and a hundred bears were rescued from Nanning bear farm.

We have climate change to thank for shape of our teeth, fossil reveals

Bright red spider discovered as colourblind, in a cruel twist of fate

Scientist says she is ‘amazed’ by the size of dolphin clitorises

Why has a tree been named after Leonardo DiCaprio?