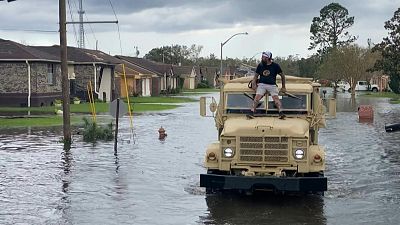 The US has been battered by extreme weather this week as the country faced one of the strongest hurricanes in its history and wildfires continue to rage across California.

Hurricane Ida made landfall on Sunday leaving at least 6 people dead and millions without power in Louisiana. With 240km/h winds, it was thought to be the fifth strongest hurricane to ever hit the US mainland.

Ida intensified so quickly in the Caribbean Sea that officials had little time to evacuate the city. It is a growing trend in hurricanes that scientists are linking to the climate crisis. Waters rose rapidly reaching over a metre in depth damaging homes and property.

Despite drawing comparisons to Hurricane Katrina - which hit New Orleans 16 years ago to the day - a multi-billion dollar levee system and a lower storm surge protected some of the city from the worst of the flooding.

When Ida hit Louisiana it was a category 5 hurricane but as it progressed inland it was downgraded to a tropical storm. Across the week it has passed through Mississippi, Tennessee, Virginia, West Virginia and New Jersey. It’s most recent arrival in New Jersey and New York has brought record-breaking rains and more mass flooding.

Meanwhile, in California, wildfires continued to spread across the state as part of this year’s intense and destructive fire season.

The Caldor Fire in the Lake Tahoe area burned through more than 75,000 hectares of mostly forested land. Strong winds of up to 48km/h and low humidity have fanned the flames allowing the fire to jump across two highways as it has burnt.

So far 468 homes have already been destroyed by the Caldor Fire since it started on August 14. As it approached the region’s popular ski resort, staff used every tool available to them to battle the flames - including snow making machines.

Around 100km north, crews are also battling the Dixie fire. At 3,627 square kilometres, it is the second largest wildfire in state history and is still burning out of control.

The widespread fires across the state have led the US Forest Service to announce that all national forests in California would remain closed until September 17.

The US isn’t alone in facing the impact of extreme weather. The number of these disasters driven by climate change has increased fivefold in the past 50 years.

Floods, heatwaves and other meteorological disasters have killed more than 2 million people around the world and cost €3 trillion in total global losses according to a UN agency.

Watch the video above to see how extreme weather is impacting people in the US.

The US will thin forests near neighbourhoods to stop deadly wildfires