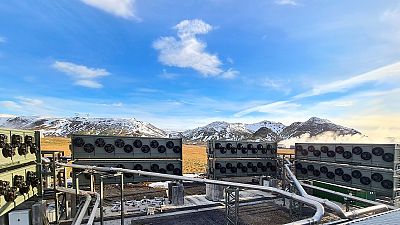 The world’s largest plant capturing carbon directly from the air has just started operating in Iceland.

Unprecedented extreme weather events have dominated the news since early this year.

Climate change has become tangible to many, casting a new light on the IPCC's warning that it is crucial to drastically reduce our greenhouse gas emissions.

One of the emerging solutions is capturing and storing carbon - a main contributor to global warming.

The newly opened Orca plant in Iceland uses direct air capture technology and is expected to remove 4,000 tonnes of carbon from the air each year.

How does the carbon capture plant work?

Filters in massive fans at the Orca plant in Hellisheidi, Iceland capture carbon from the atmosphere and store it below ground in basalt rock where it can be mineralised.

The plant was built by the Swiss company Climeworks. It teamed up with another company called Carbfix to carry out the rapid underground mineralisation.

This is the process where the air-captured CO2 is mixed with water and pumped deep underground, then trapped in stone through a natural process that takes less than two years.

We are proud, excited, and beyond delighted to have arrived at this stage in our journey to reverse climate change.

Located next to ON Power’s Hellisheiði Geothermal Power Plant, Orca is run fully on renewable energy. Climeworks says the plant has a small physical footprint and doesn't compete with agriculture for land.

"We are proud, excited and beyond delighted to have arrived at this stage in our journey to reverse climate change," says Christoph Gebald, co-founder and CEO of Climeworks.

The company claims a plant like this could be constructed in any country with renewable energy and the conditions needed to store the mineralised carbon.

Could direct air capture be the solution to climate change?

There are other forms of carbon capture according to Dr Ajay Gambhir from the Grantham Institute on Climate Change and the Environment at Imperial College London.

But the popularity of direct air capture - the process that is being carried out at Orca - is growing.

Gambhir believes plants like this do have an important role to play when it comes to tackling climate change.

"Not only is it something we can do in parallel with decarbonising the world's energy system, but it also may help us do something very important later in the century, which is actually drawn down excess carbon dioxide from the atmosphere," he says.

Click on the video above to see how Iceland's new carbon capture plant works.

Greenpeace pulls stunt to demand a climate chancellor in Germany

This eco-artist builds cat shelters out of recycled car tyres