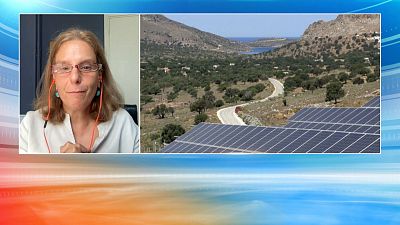 Eleni Myrivili talking to Euronews about the dangers of urban heatwaves.   -   Copyright  Euronews
By Euronews  •  Updated: 17/09/2021

Athens has just appointed Europe's first-ever Chief Heat Officer and after the terible wiildfires that threatened the city this summer, she's exactly where she needs to be.

Eleni Myrivili calls heatwaves the "silent kiler" because they kill or worsen the health of many residents every time they hit. And, she says, this is only going to get worse as temperatures rise globally.

But officials' focus on global warming is actually part of the problem, for cities at least. Urban centres are of course affected by rising global temperatures, indeed nowhere is unaffected.

However cities face the double whammy of also being "urban heat islands." These are caused by all the hard surfaces in cities absorbing heat, thereby raising overall temperatures.

The new Chief Heat Officer says cities are unprepared for what is to come.

The past five year period is among the hottest on record. We continue to destroy the things on which we depend on for life on earth.

Mediterranean countries experience temperatures that are 20 per cent higher than the global average. At the beginning of August, northern Greece reached 47.1 degrees Celsius - breaking the country’s record for the highest temperature ever.

What will the Chief Heat Officer focus on?

So what's the soluion? Eleni says that she'll be prioritising raising awareness of "what the future holds because of climate change, and how our cities are going to be more and more...little radiators that will be dangerous for people's lives."

In tandem, she'll put in place emergency measures to protect the most vulnerable during heatwaves.

Her longer term goal is making Athens cooler by making sure that everything built from this point on mitigates heat.

Watch the full interview with Eleni Myrivili above.

German elections: 'One week to go but still no clear winner'

What caused the Tonga eruption?

Why are these Australian dancers performing on a melting iceberg?

The tourism paradox: Is the Maldives facing an existential crisis?