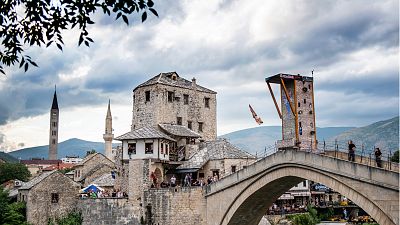 If you thought Olympic diving was impressive, then cliff diving is going to blow your mind. In the Bosnian city of Mostar, locals have been diving off their iconic Old Bridge (Stari Most) for centuries.

The first recorded jump from the bridge was in 1664 and the city has held an annual diving competition every year since 1968. In 2015, Mostar was also added as one of the stops on the Red Bull World Cliff Diving Series tour.

Though it’s likely not still enforced today, it was traditionally a right of passage for local 16-year-old boys to jump from the bridge. It was thought that any boy that didn’t complete the jump would be a failure in life.

What is cliff diving?

Cliff diving is one of the oldest extreme sports in the world. It combines acrobatics, diving and the adrenaline of jumping from enormous heights.

The Old Bridge in Mostar is between 20-27 metres high depending on the height of the river and during the Red Bull competition a raised diving platform is added onto the bridge, making the jump even higher.

To put it into context, Olympic divers jump from boards which are 3 or 10 metres high.

Before the jumping begins at the annual competition run by the Mostar Diving Club, flowers are thrown in the river to honour those who lost their lives defending the bridge during the war.

Both adults and juniors are welcome to enter and there are categories for different styles of jumps. Competitors are often locals but it does also attract others from the surrounding Balkan countries and winners receive a medal and a trophy.

The Red Bull Cliff Diving World Series sees the best professional divers from across the world compete in a string of unique locations in the hope of going home with a rather large prize pot.

Mostar was the third stop on this year’s tour in which the divers must perform a number of required dives to showcase their skills in order to gain points.

Don’t worry if you’re not an elite level diver though, as visitors to the city who are feeling brave can also have a go at jumping from the bridge - for around €50.

The local dive shop will guide you through how to jump safely, including several practice runs from a 10 metre platform before the big jump.

You shouldn’t expect any acrobatics though; it’s mainly just lots of falling and screaming.

If the height and danger haven’t already put you off, another point to consider is that even though the average summer temperature in Mostar is a delightful 21C, the river Neretva is one of the coldest rivers in the world. It reaches around 7C at most during the summer.

If you do complete the jump though, you’re a member for life, meaning you can come back and jump again for free!

You’ll also receive a certificate and your name will be added to the record books kept at the diving club recording every single jumper since the bridge’s reconstruction.

Mostar is the 5th largest city in Bosnia & Herzegovina and is located in the south west of the country. The river Neretva, into which the divers jump, runs right through the centre of the city.

Mostar is known for its iconic Stari Most, which literally translates to ‘Old Bridge’. It was first built in the 16th century and stood for 427 years before it was destroyed during the Croat-Bosniak War in 1993. It was rebuilt after the war and was reopened in July 2004.

Many of the pieces of the original bridge were recovered from the river and now line the banks, acting as seating for spectators to watch the divers.

The bridge is in Mostar’s old town, a UNESCO World Heritage Site. Its cobbled streets are home to colourful bazaars, stunning mosques and eateries where you can easily spend days shopping and exploring.

Watch the video above to see the cliff divers in action.

Dry January: Here’s how to have fun and stay sober this month

I spent 6 months in Greece as a digital nomad. Here's how you can too

The street actors spreading awareness about social issues in India

My reverse culture shock: Returning to the UK after a decade in Dubai